I'm a Streetwalking Cheetah with a Heart Full of Napalm 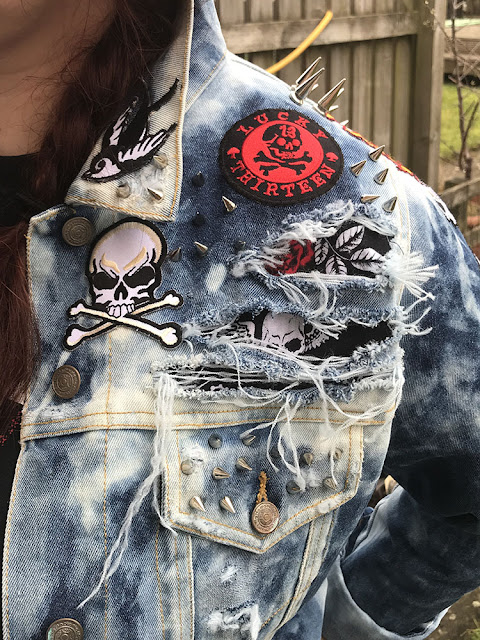 Mr Pop got there first but it was my Mum that was an enabler for today's post I can't believe that I started writing a WHOLE YEAR ago (and only 4 months to edit the pics too)! It's been a bit mad - new job, retraining (that almost broke me) yay!, moving back to Scotland, loads of travelling - but I am now at a point where things are calming down so hopefully will be blogging a bit more. Still not unpacked though. 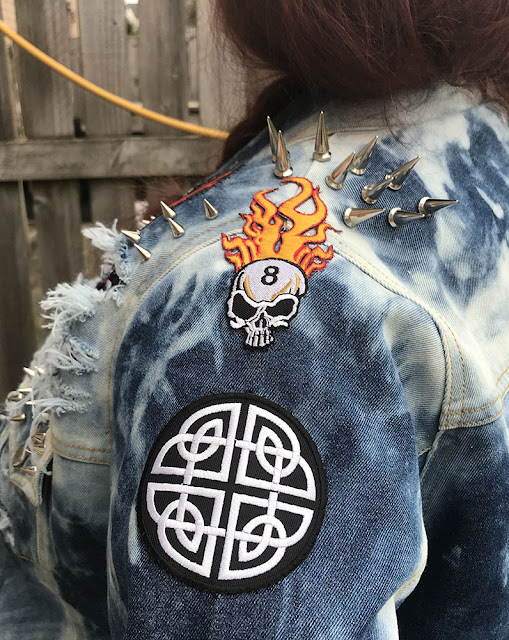 I had long been searchin' for a denim jacket to put some patches on. However, although I have a couple they were handy just to fling on so I never got round to doing anything with them. 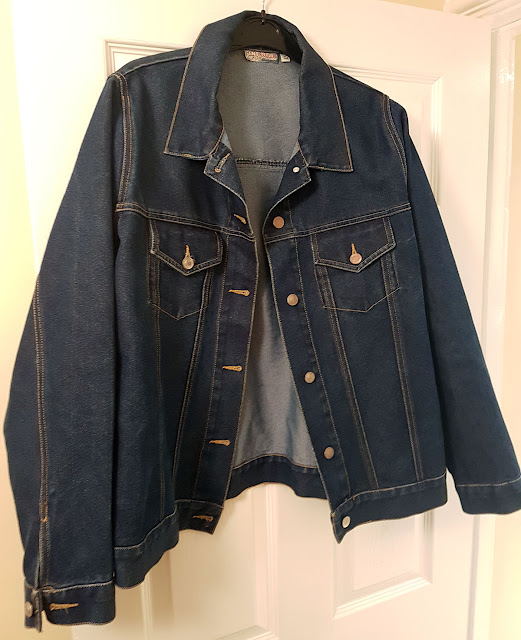 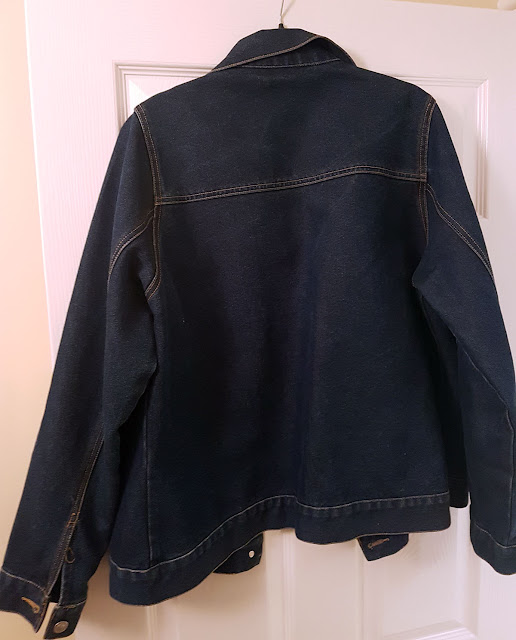 Cue Mum finding me a pretty basic indigo denim jacket in a charity shop, still with the tags on, for a mere £3. It was quite a boxy shape and non-stretch, so made me look a bit "mumsy". What's a girl to do except get the bleach and the scissors out and start destroyin'? 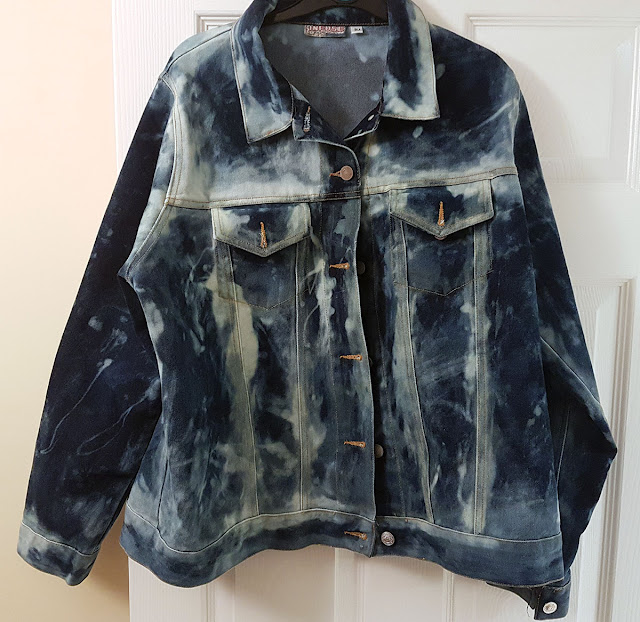 First off, I used the posh gel bleach. Although it might bring your toilet up all sparkly it was less than useless at getting the dye out of the denim. I literally poured 3 whole bottles over it and left it for a couple of days with very little dye lift. I had to go hunting down the sort of thin liquid beach that I used to use in the 80's for my jeans. I stuck it in the washing machine between bleach types just in case they reacted and released chlorine gas. Safety first, kittens! The kitchen was bad enough as it was. My poor lungs will never forgive me. 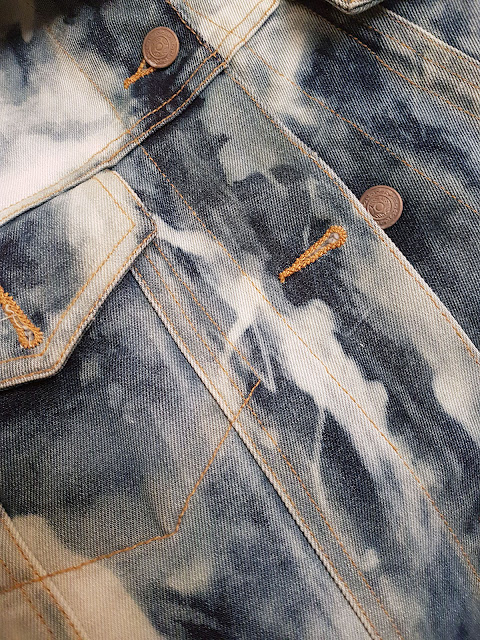 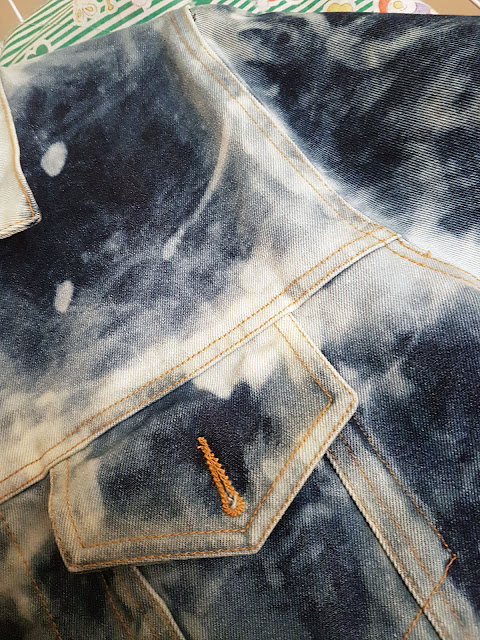 I used a combination of a paint brush to direct the bleach and dribbling it on. It took several applications to build up the light and dark patches. I tried to bleach round the edge where it would fade after a lot of wear. 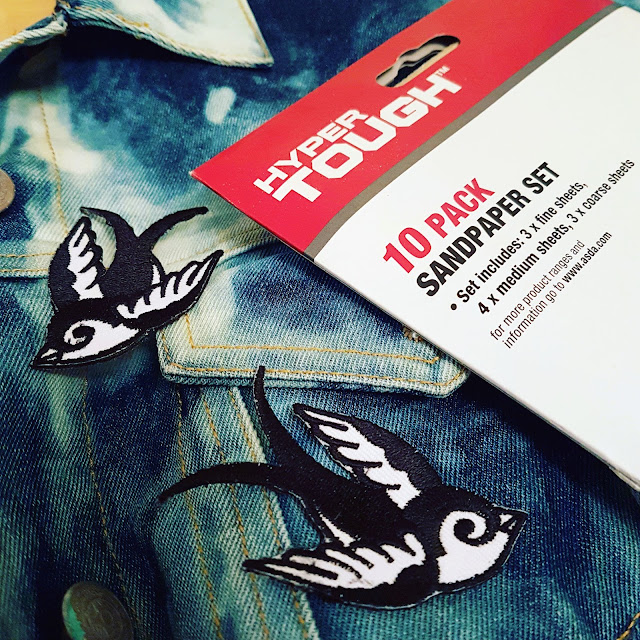 Next was the really fun bit where I got out the sandpaper to rough it up a little. Again I sanded along the seams where normal wear would take place. I also went a bit scissor happy and tried to wear patches through the fabric by scraping the surface to expose the threads, as well as hacking some holes in and fraying the edges. 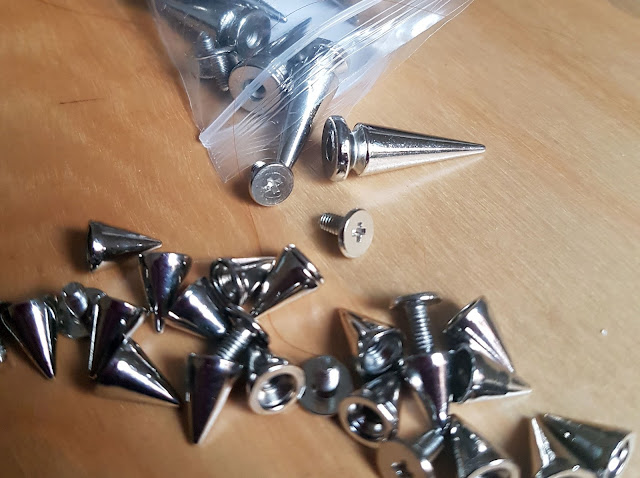 After that it was patches time. I went a bit mad on eBay and bought a vast amount but have decided just to decorate over the top and the shoulders.  They take so long to sew on. I tried to do it as invisibly as I could. I also added some studs as I am still stuck in the 80's because I could and it seemed like they belonged there since I was channeling a bit of a punk aesthetic.. 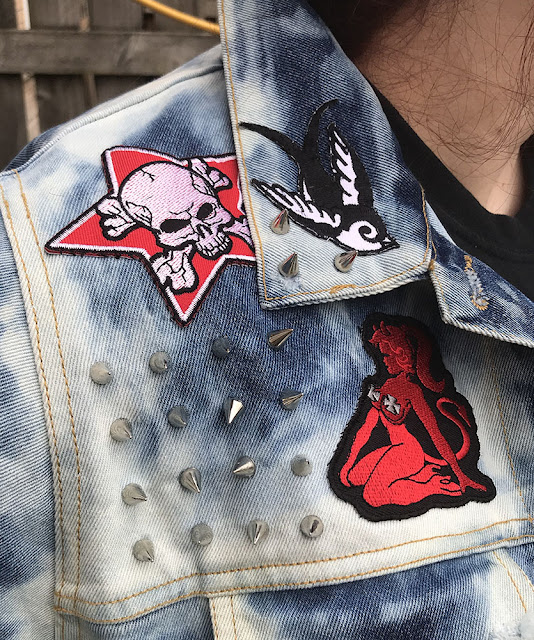 They are the screw-backed kind but I added a little superglue to the inside of each stud as I was screwing it together. A good idea to make them stick but I also stuck my fingers together and to the jacket. Moving swiftly on...... 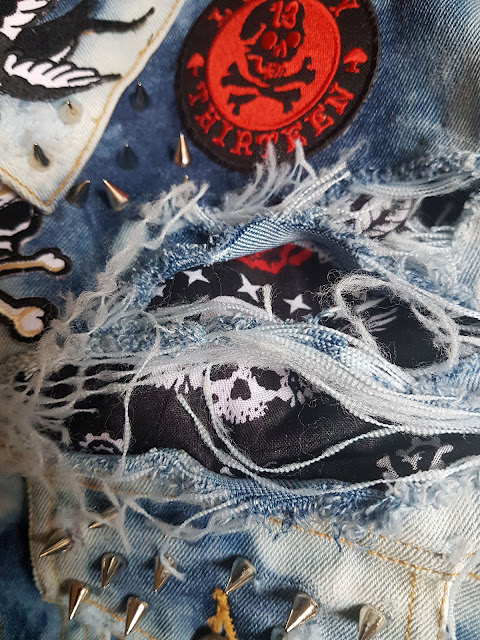 Under the rip in the front I added a piece trimmed from a bandana (also from eBay) for a bit of colour and to support the ripped fabric. I quilted it to a bit of spare African wax print for stability and hand stitched it in place on the inside. 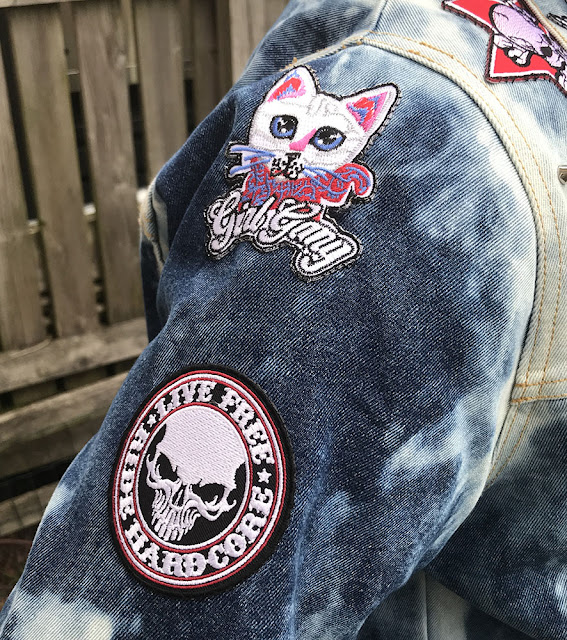 I had a whole load of fun making this jacket and definitely have had fun wearing it. It's a garment that will always be added to. It still looks too "new". Plus, for studs it is either "go big or go home" and this is still tiddly.

Since I am on a punk-style roll a la 15-year old me, this can be my participation in Me "Destroyed" May. Probably more apt a title for most of the things I try to sew. 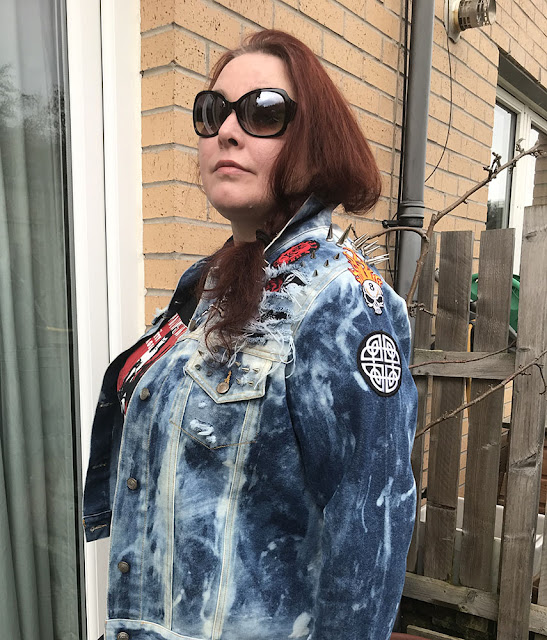 Do you ever upcycle/recycle garments? Or even destroy perfectly good jackets?
Plus, bonus round - next post I might just be hosting a giveaway!

Until then, take care, lovelies!

I'll leave you with a bit of The Stooges. You are most welcome!

Posted by Mother of Reinvention at 21:30

Mother of Reinvention
Hello, my name is Kelly. Welcome to MoR! This is the spot to follow the creative highs and lows as I try to upcycle my life. Boring scientist by day, secret seamstress by night. I love all things sewing, crafting, vintage fashion & home related. I am a complete corset obsessive, making corsets under the "Bad Kitty" banner and have been known to sew a costume or two. I live in Glasgow with way too much vintage fabric and sewing machines. When I am not sewing I like gardening, cooking and baking. I have a beautiful daughter who thinks I am embarrassing and a very cuddly cat.